As the American public and the U.S. economy fight the devastating spread of COVID-19, President Trump signed a $2 trillion coronavirus relief bill that became the largest stimulus package in U.S. history. It represents a massive financial injection into a struggling economy with provisions aimed at helping American workers, small businesses, and industries grappling with the economic disruption.

The S&P 500 recently traded at 2,192 – approximately 35% lower than the index all-time high reached just six weeks ago. The market has since rallied from the lows and ignited a debate about whether the market has bottomed. Until we have more clarity on the health crisis, Peloton is prepared for the stock market to retest those levels and anticipates markets will remain volatile (see chart). 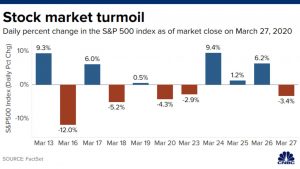 What does more clarity mean in practice? It means having more data to better understand the virus’s spread and a more realistic picture of populations most at risk of infection. It also means ramping up production of protective and therapeutic medical equipment and experimental drug treatments. And it means a reduction in the number of new cases. Positive changes in these data points are already underway, but they will take time to fully realize. Because the stock market is a discounting mechanism, we know that the bottom in financial markets will occur before the bottom in the health crisis.

Individual stocks do not all bottom at the same time with “the market.” Some stocks have already declined to irrationally low levels and bounced considerably. For many stocks, the optimal opportunity to buy at the short-term lows has already passed. That doesn’t mean that it’s unwise to buy those stocks at still-depressed levels. It does, however, demonstrate just how hard it is to act at the precise best time to buy any financial asset. If the goal is to accumulate wealth over time, and if an investor believes that prices will be higher six months or two years from now, it is not necessary to invest at exact lows in order to achieve goals. It is possible to be wrong on a stock short-term but right longer-term, and we believe that’s the environment we’re in currently.

As we’ve written previously, we do not believe that we (or anyone) can accurately call when bottoms occur. However, we do believe that several quarters out, we will be able to look back and see that a bottom did occur, and that the period of time around that bottom will have been a good time to accumulate shares in great businesses. As Sir John Templeton said, “To buy when others are despondently selling and to sell when others are avidly buying requires the greatest of fortitude and pays the greatest ultimate rewards.” Economic activity ultimately will lead to higher S&P 500 levels, but with respect to bottoms, we will likely see the turn first in financial assets, prior to a full resolution of the health crisis or economic fallout.