Getting Ahead of the Curve 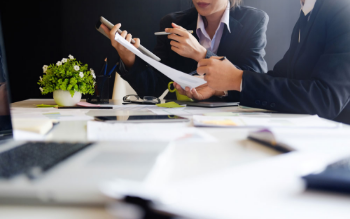 “Inflation is always and everywhere a monetary phenomenon, in the sense that it is and can be produced only by a more rapid increase in the quantity of money than in output.” – Milton Friedman

How We Got Here

There is only one threat driving the sharp correction in global stock prices this year: inflation. While there have been many secondary factors (Russia, China, supply chains, energy prices, etc.), the increase of U.S. dollars surpasses them all. The graph below shows the percent change in dollar supply since the end of 2019 vs. the percent change in the inflation rate. Note that the acceleration of inflation (273.8%) is different than the commonly quoted twelve-month CPI change (8.3% through April). 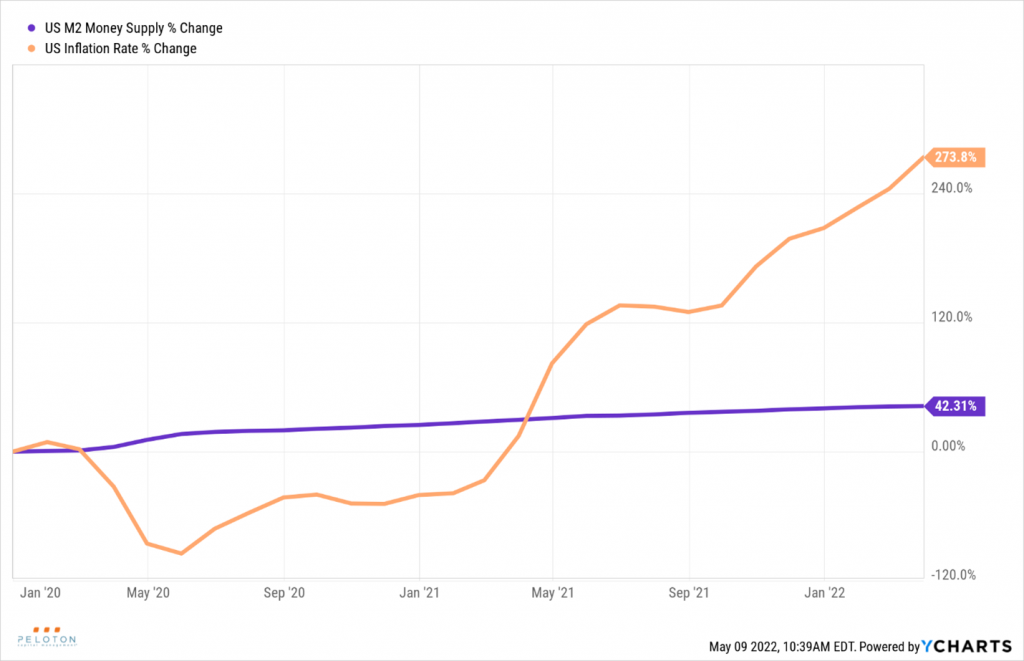 The beginning of this inflation saga is now very familiar: the Federal government issued bonds aggressively to support a workforce whose livelihood was razed by Covid quarantines. The U.S. Federal Reserve Bank bought the newly issued Treasury bonds with dollars created specifically for its plan. In part, the Fed’s confidence to proceed into these uncharted waters was bolstered when their 2008 initial foray into Quantitative Easing (“QE”) failed to produce significant inflation. This latest round of QE was much larger by comparison and in retrospect, a cautious Fed has since been too slow in responding to inflationary signals. Thus, they have been labeled “behind the curve.” The question now is, how do they get ahead of the curve?

The graph above illustrates the Fed balance sheet growth since before the prior recession: from $1 trillion in 2008 to $9 trillion today. They will begin raising rates by tapering their bond purchase program from the current $120 billion per month. The details of the widely anticipated tapering emerged on May 4: beginning in June, monthly purchases will decline to $47.5 billion for three months, before increasing to $95 billion in September. The planned $50 billion September increase shows that the Fed is concerned both about inflation and the appearance of acting too aggressively to get ahead of the curve. Whether the Fed proceeds with the September phase of the plan will be driven by many data points in the interim, including five CPI reports. Instead of sticking rigidly to a steady taper, the intent is to communicate their commitment to remain data dependent.

A complicating feature of this strategy is the interest expense on the accumulated federal debt: as rates rise to break inflation, so too will the government’s interest payments. The low-rate environment since 2020 has bought the government room to maneuver, but they must proceed cautiously.

While the challenges ahead are real, the Fed still retains significant power. To begin with, the record low unemployment rate (3.6% in April) essentially means that the central bank has only one mandate for the near future: price stability. The graph below depicts the strength of the U.S. dollar index vs. the price of gold per ounce. Gold – viewed by some as a dollar substitute – rose as Russia’s Ukraine invasion loomed. Demand has subsequently declined. Meanwhile, the U.S. dollar’s demand vs. a basket of global currencies has risen persistently. The upshot is that dollar strength reflects confidence in the U.S. economy relative to other countries, and that confidence has been growing before tapering has begun. 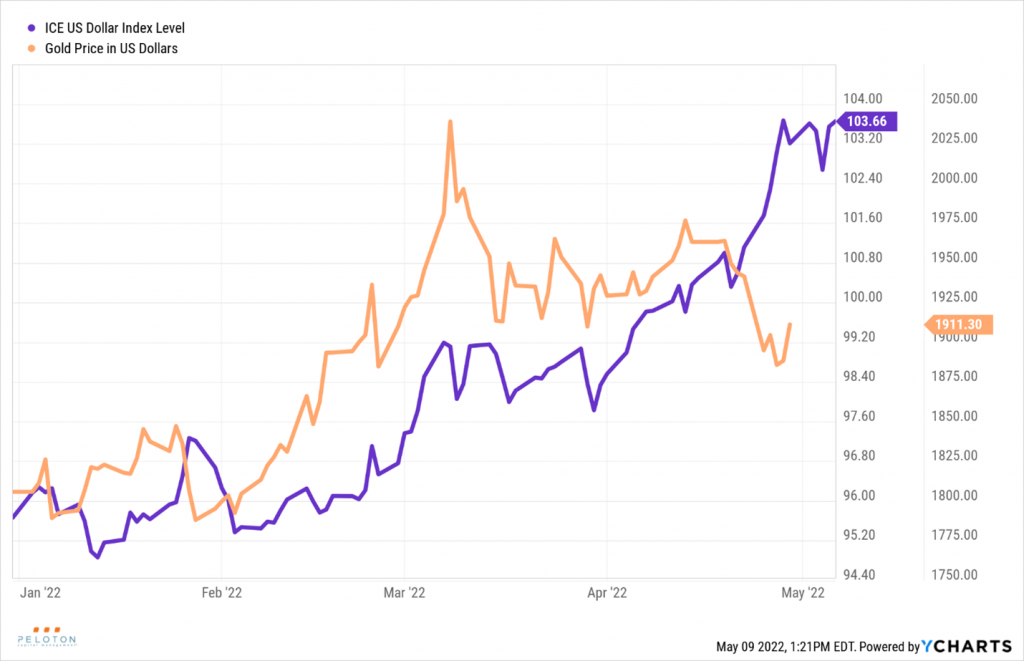 Today’s inflation results from massive Covid stimulus programs funded with new dollars. The “V-shaped” recovery in 2020 was possible because the Fed exercised its unique power to create more dollars – still the global reserve currency. But as the Friedman quote above predicts, inflation was inevitable. To get and remain ahead of the curve, we need persistent fiscal and monetary discipline: lower budget deficits, and a gradual reduction in dollar supply, the pace of which is based on new data. The Fed appears to be intent on doing its part in this fight.

We continue to recommend short maturities for bond investors but expect that intermediate bonds will offer attractive yields again soon. Stock investors must understand that the portion of their portfolio in growth assets is periodically subject to significant volatility. In market economies where tax policy is relatively stable and the rule of law intact, great companies – and their stocks – ultimately flourish. That statement does not come from an incorrigible bullishness but from financial market history, as depicted in our final graph: the S&P 500 Index over the last 50 years. 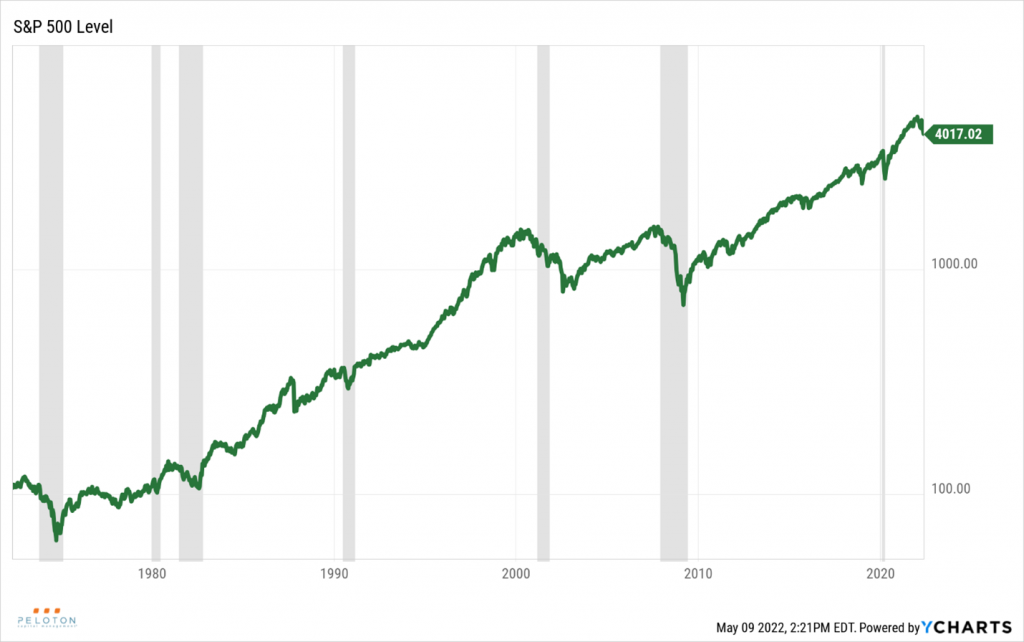 Not FDIC Insured – No Bank Guarantee – May Lose Value