Disinflation Has Arrived – Where do Stocks go from Here?

Investors embraced last Thursday’s inflation news with enthusiasm. The Bureau of Labor Statistics reported that the Consumer Price Index rose 7.7% year-over-year and 0.4% for the month of October. Analyst estimates from Dow Jones were 7.9% and 0.6%, respectively, and the better-than-expected results eased concerns about whether the Fed’s tightening actions had been having their intended effect. By historical measures, 7.7% is still high. However the disinflationary trend from the apparent peak of 9% in June is favorable for financial asset values. 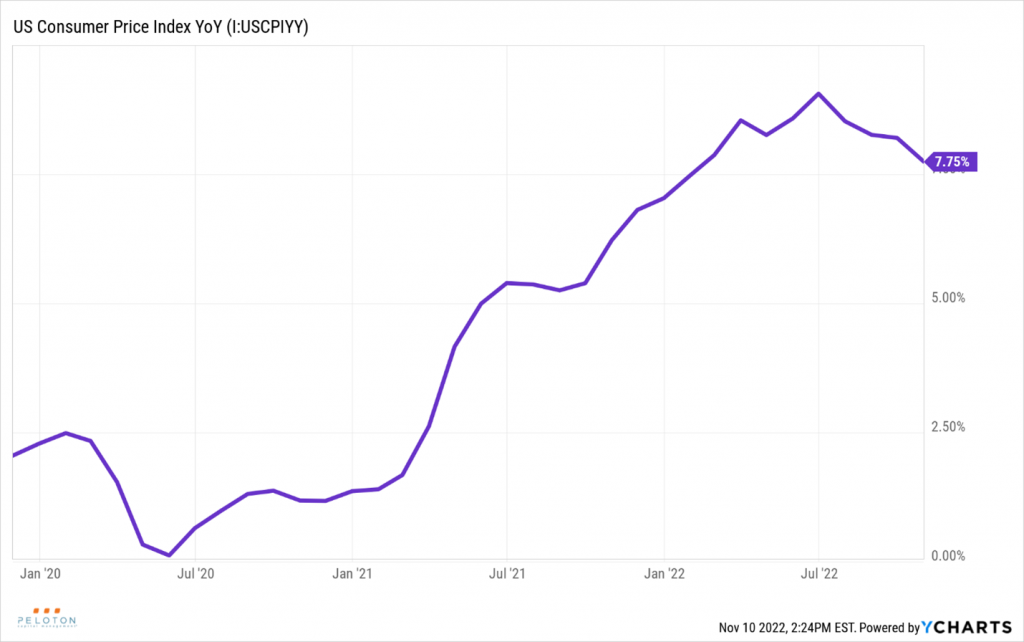 Given that inflation is moderating, where might stocks go from here? The graph below compares rates of inflation with stock market performance during different periods of monetary policy:

Observation: positive stock market returns have been associated with low inflation. The great bull market from 1981 – 2000 was in part fueled by an exceedingly long period of declining interest rates. Low real interest rates reduce borrowing costs for corporations and allow common stock multiples to expand. In retrospect the most astounding recent phenomenon was that inflation remained virtually non-existent from 2009 to 2020, given the U.S. central bank’s extraordinary quantitative easing (“QE”) programs.

At present, more than 60 countries peg their currencies to the dollar, and many global debtors issue bonds denominated in dollars. This persistent demand for dollars offset the feared inflationary result of the Fed’s first QE exercise a decade ago. However, the money supply increase was much larger in 2020-21 than a decade earlier. The almost indiscriminate dollar printing in response to the Covid lockdowns tested – and found – the limits of inflation-free money supply expansion. We continue to expect the central bank to remain data-dependent and vigilant in the fight to reduce producer and consumer costs and with their increased analytical capabilities. We also expect faster market responses to their actions.

As interest rates have increased, the multiples of sales investors are willing to pay for stocks have come down. The current weighted average P/S multiple for S&P 500 stocks is now below the 5-year median (4.6x vs. 4.9x) and well below the 3-year median of 5.7x.

While we anticipate that the labor market will soften further, we also believe that, between the Fed’s vigilance and the fact that much of the expected multiple contraction has already occurred, stock prices have begun to stabilize. As market participants adjust to the new, higher interest rate environment, their focus will shift from Fed actions to corporate profits. Companies which do not need to rely on cheap capital to compete and thrive will be the winners in this environment, and it is the stocks of these companies which Peloton pursues.

Not FDIC Insured – No Bank Guarantee – May Lose Value