October 9 marked the five-year anniversary of stocks reaching all-time highs. A lot has transpired since then. Lehman Brothers collapsed less than a year after the Dow first touched 14,200, and stocks skidded for months before probing unthinkable depths in March, 2009. Stocks have rebounded dramatically in the three-and-a-half years since. At the time of this writing, the major indexes are just several percentage points from revisiting the 2007 highs.

The 25th anniversary of Black Monday also passed this month. On October 19, 1987, the Dow Jones Industrial Average fell an astounding 508 points (at the time, 22% of the value of the index) in a single trading session. Everyone with ties to the financial markets vividly recalls the panic of the day. And even casual observers quickly learned of a crash of epic proportion. Hindsight puts Black Monday appropriately within the context of market action around that time. The story rarely told is that stocks had been roaring higher for more than five years prior to the sell-off (see Table 1). In 1987 alone, through August, stocks had advanced 44% year-to-date (on top of the compounded annual gains amassed from ‘82-’86). The weeks leading up to Black Monday erased some of the gain to-date, and October 19th was shocking and horrendous, but stocks still managed a 5% gain for the calendar year. The S&P then tacked on another 17% in 1988 and 32% in 1989. 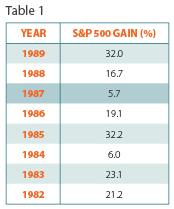 For those who held down their lunches on Black Monday and held on to their stocks, the compounded annualized return from ’82-’89 was a whopping 19.1%. Only several years after The Great Recession and the most recent near-death experience for financial markets, it may be too soon to put the nightmarish memories of late 2008 and early 2009 in proper perspective. Already, however, it feels safe to say that, like Black Monday, those few months were both worse than anyone could have imagined at the time, and not as bad as everyone feared after the fact. Both time periods would have been wildly profitable occasions to buy stocks, despite all indications to the contrary at the time. That is monumentally easier to say now from an objective perch several years later, without all of the uncertainty and terror of the moment.

Investors and money managers don’t profit or earn income by opining on the past or framing market history with the proper perspective. We must act (or not) on days like Black Monday and during periods like 2008-2009, just as we must navigate today’s uncertain environment. Only days away from the presidential election (which is also being billed as the most important of our lifetimes), and with the edge of the Fiscal Cliff in sight, many believe that another calamitous stock market crash is both inevitable and imminent. Others believe that today’s uncertainties and widespread fear provide profitable opportunities for objective, disciplined investors.

Asset prices in markets reflect the collective forecasts of hundreds of millions of investors around the world. Every day, price levels adjust as new information is assimilated. Professional and non-professional participants constantly handicap and re-handicap the likelihood of a range of outcomes on thousands of issues (both macroeconomic and at the individual company level). On that score, everyone (i.e., “the market”) already knows that the “Fiscal Cliff” could actually happen next year. And furthermore, markets have known about this possibility and its wide-ranging ramifications for months. Traders, investors, and money managers are voting with their feet ahead of time to best their portfolios for what they think may lie ahead.

The notion that stocks are inexplicably levitating—blissfully unaware of any potential danger ahead—and will plunge off the Fiscal Cliff along with Grandma and everyone else is nonsense. A range of outcomes is already “priced in.” That’s not to say that markets are priced impeccably at any given point, but it is simply unreasonable to think that current prices don’t already reflect a significant likelihood of identifiable risks. Between now and year-end, the broad markets will oscillate as the odds of full-blown “Taxmageddon”—and other issues around the world—are weighed by the consensus.

Economically, too, the Fiscal Cliff is already here. The mere threat of it has slowed economic activity during 2012. Business executives and heads-of-household have been making decisions all year with these possibilities in mind. Rational managers have downshifted operationally because the Fiscal Cliff (and the potential for other bad economic policy) increases risk. Therefore, some of the negative consequences of the Fiscal Cliff have been “pulled forward” and are already visible in the data. This phenomenon lessens the potential fiscal plunge and reduces the angle of decline. The 2013 impact is more of a fiscal “slope.” Whatever it’s called, it is likely to hinder GDP growth, and everyone wants to avoid it.

At Peloton, we do not build client portfolios with macroeconomic forecasts, election predictions, or guesses about politicians’ motivations (inconsistent fundamentals!). However, in this day and age, these influences have increasingly important implications for the operating environment of the actual companies we do own.

The election itself is not a binary investment event. It is not as simple as buying stocks if Romney wins or selling them if Obama is re-elected—or vice versa. Either way, the outcome alone does not address uncertainties concerning Obamacare, Dodd-Frank, the Fiscal Cliff, the strength of the economic recovery, a domestic energy plan, or Middle Eastern foreign policy. President _____________ will still have to work with Congress to get anything done on any of these fronts. And, while politicians make sausage in Washington, the economy will do what it does and companies will do what they do. Right now, the trajectory for both is modestly higher.

Investors who have adopted extreme portfolio strategies betting on outlier outcomes will probably be disappointed. The months leading up to Y2K scared a lot of people into doing a lot of ridiculous things preparing for an “inevitable” catastrophe that never happened. Uncertainties surrounding the election and looming fiscal deadline have lured many investors into similarly inappropriate strategies.

In politics, as in business, the best deals are often those which make both sides unhappy and, one way or another, the unanimous pleas to avoid Taxmageddon finally force politicians into a mutually dissatisfactory deal to avoid the worst case. But neither the timing of a deal nor the presidential election will be the perfect signal for investors to emerge from their bunkers. Our leaders have demonstrated, time and again, a willingness to play chicken with the American economy until the eleventh hour. It is certainly conceivable that, regardless of the election outcome, the Fiscal Cliff will not be addressed convincingly before December 31. That would not be a favorable outcome, but it does not mean calamity either. If congress and the president don’t get it together until early in 2013, we expect a sloppy start to the year, but, ultimately, most tax laws and rates can be applied retroactively to January 1.

Deal or no deal, Obama or Romney, the most likely outcome for the economy and stocks next year will be firmly between the two extremes. The bear case is an easy one to make. Most are focused on what will happen if the “wrong” president is elected; most assume the Fiscal Cliff will not be resolved, growth will be sluggish, and employment will not improve markedly; most assume Europe will not improve, and that an Iranian-Israeli conflict is likely, if not probable. A lot of negative sentiment is priced into markets and, if things go badly, stocks might struggle. What if anything goes well or even just a little better than generally expected? That’s the bull case. It’s less intuitive and harder to see. That is precisely why, at these prices, it is the scenario that is not priced-in.

The Peloton Position is a compilation of original insights and writings by Peloton Wealth Strategists. This issue features articles by Matthew K. Bradley, Executive Director and Chief Investment Officer.